What the hell was up with that giant space baby at the end of the movie anyways?

When most people watch 2001 for the first time they often walk away from it saying things like “that movie confused the hell out of me”, “why are the first 20 minutes of the film just full of monkeys?” and “what was up with the giant space baby at the end?”. While this two part infographic doesn’t answer ALL of those questions hopefully it helps make things just a little bit clearer! ;) 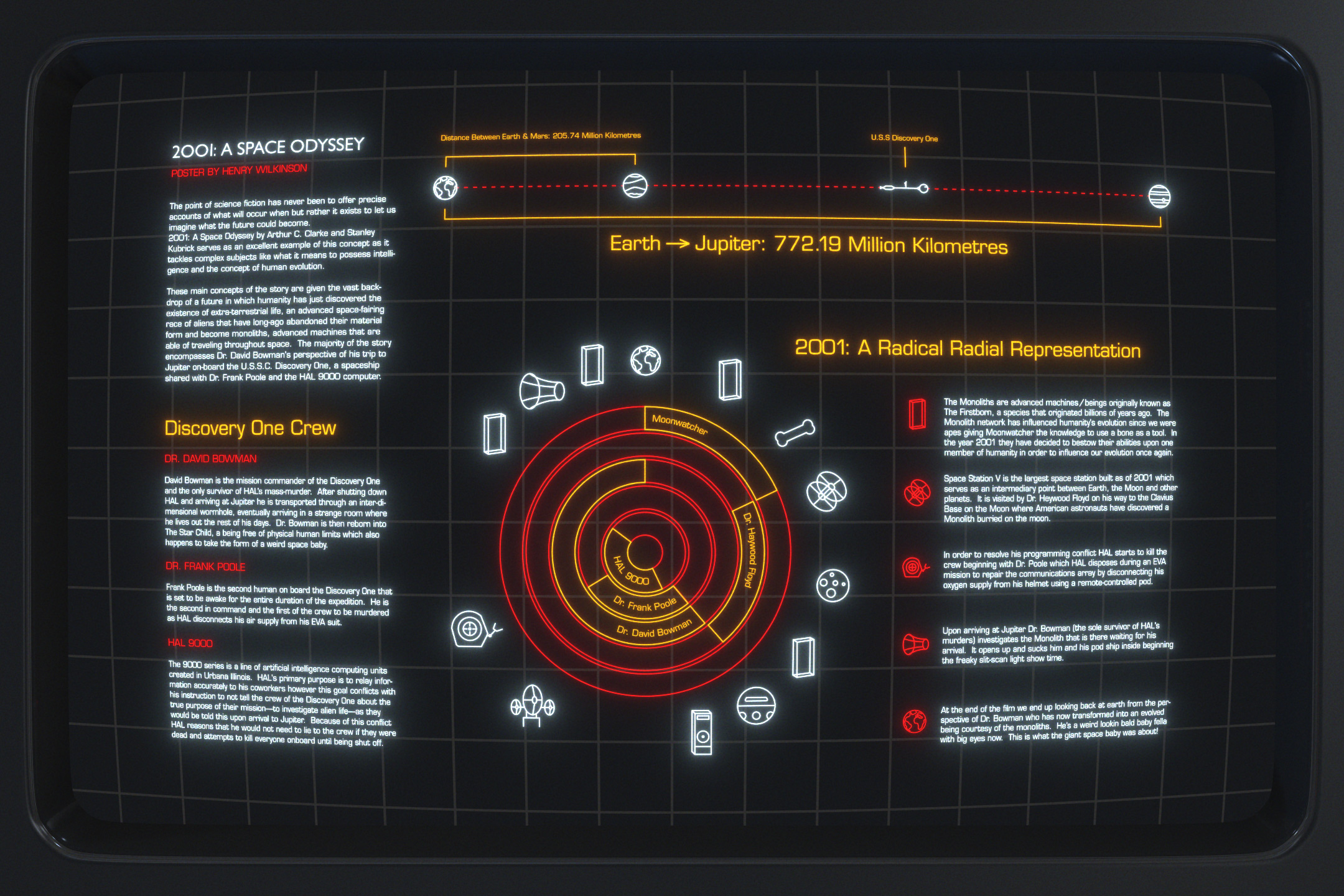 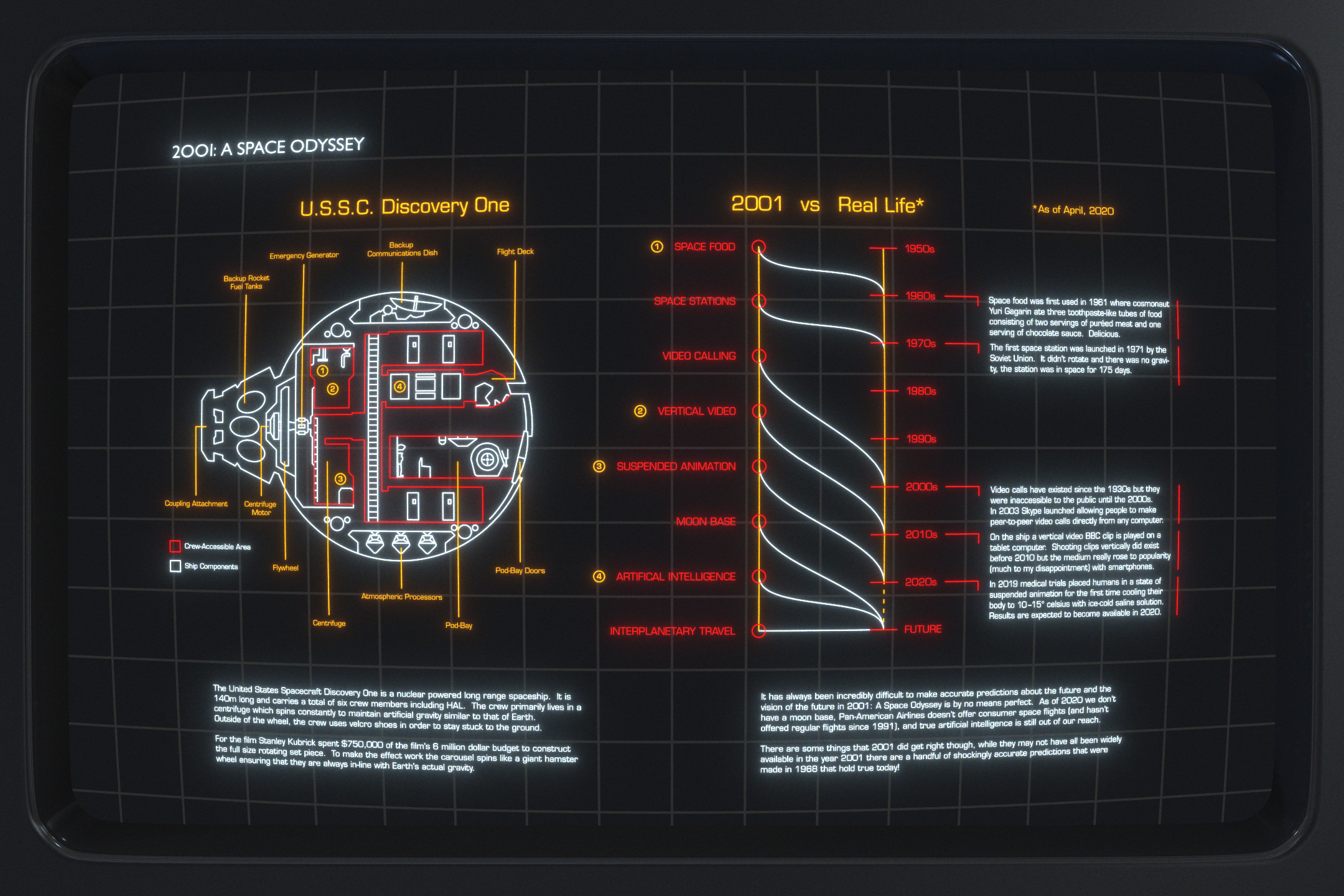 2001 made a lot of predictions about the future but in my opinion one of the most forward thinking aspects of the film was how computer interfaces were imagined. While my infographic does not match the style of most of the interfaces in the film, I wanted to appropriate the monolinear line-art aesthetic of early computer graphics. Inspired by Star Wars’ Death Star plans presentation, the dish model in 2001, and the comfortable happy glow of CRT monitors, I came up with this process. It’s by no means an accurate re-creation but I still think it gets the point across! 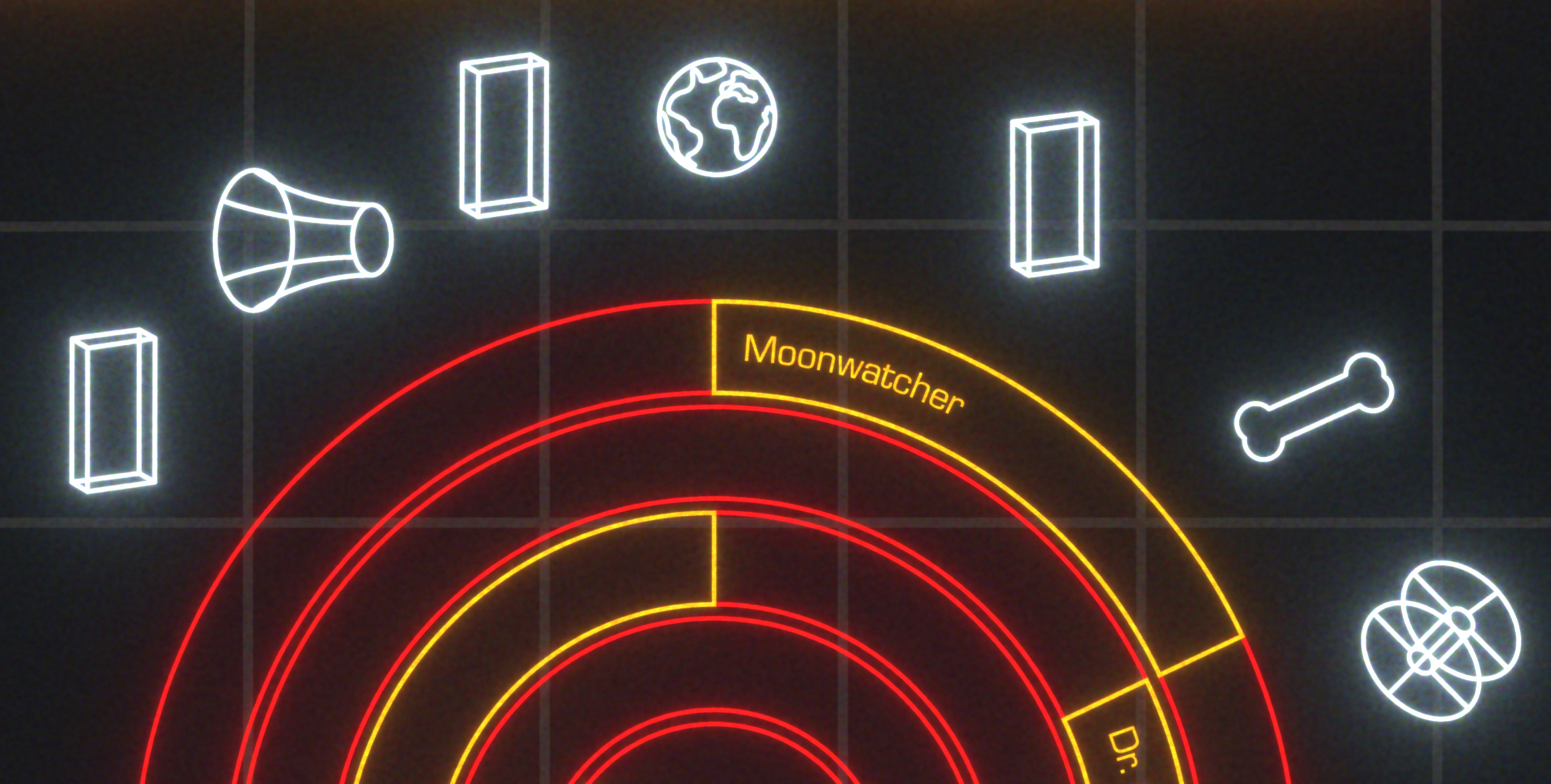 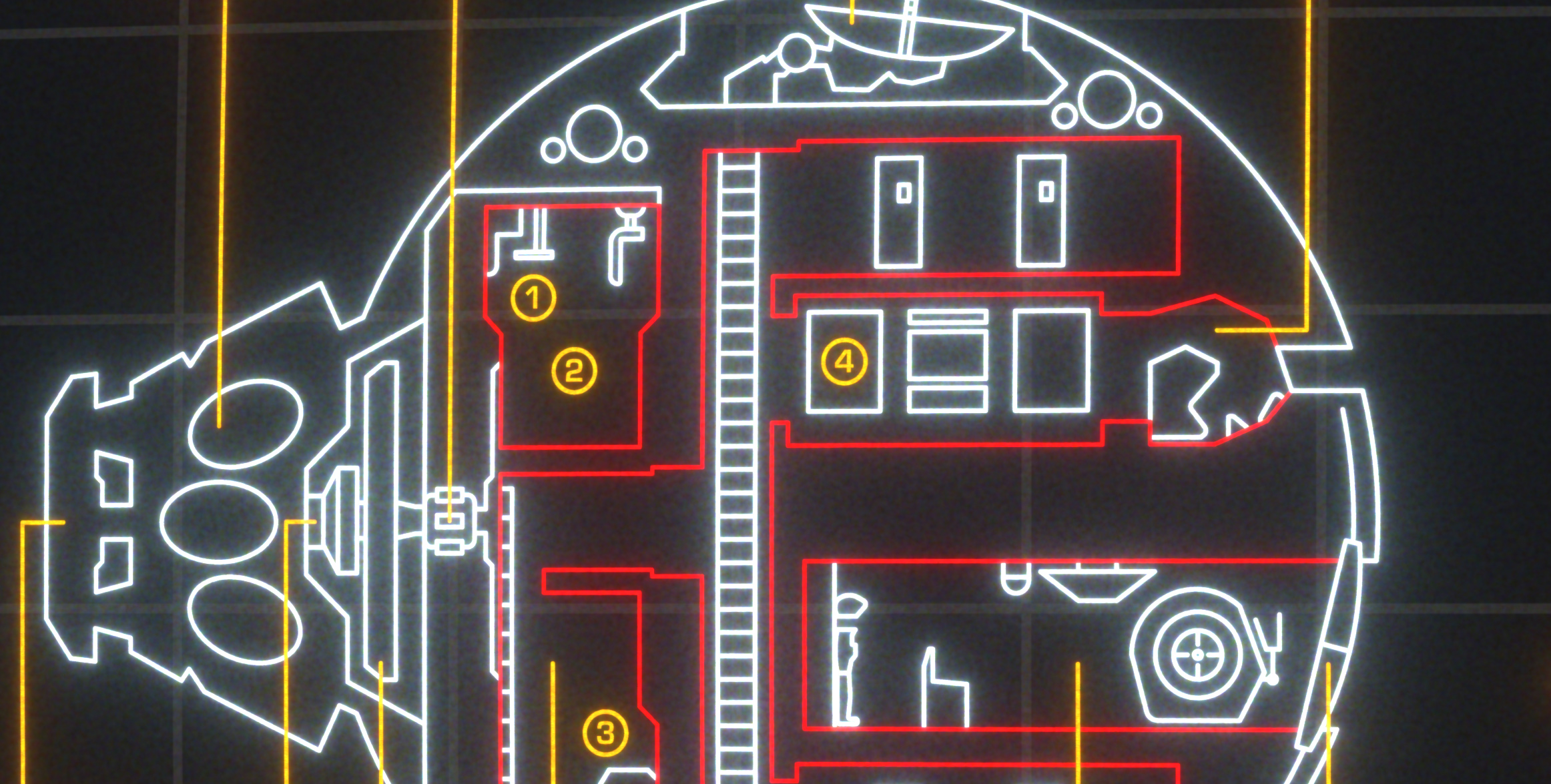 If you’re actually wondering what the deal is with the baby at the end of the movie (spoilers for a movie from 1968) here’s the deal. After commander Bowman grows old in the monolith’s alien zoo he is visited by a monolith — the large slabs that have played a part in our evolution granting us the ability to use tools and such. As he dies the monoliths allow him to be re-incarnated into a being known as “the star child” which is essentially the next evolution of humanity. The final shot shows this child in space looking down upon Earth.

This was my first project using Natron, an open source node-based compositing program. Illustrator’s appearance panel is great but it doesn’t offer you the same level of control when applying effects that I’ve come to love with Nuke and Natron’s respective node-based workflows. Because Natron works only with 32-bit colour it allowed me to achieve compositing results that cannot be done in Illustrator due to its limited 8 bit working space—specifically the exponential glows—as well as other effects that just aren’t built into the program like accurate looking film grain.

The node graph for this project 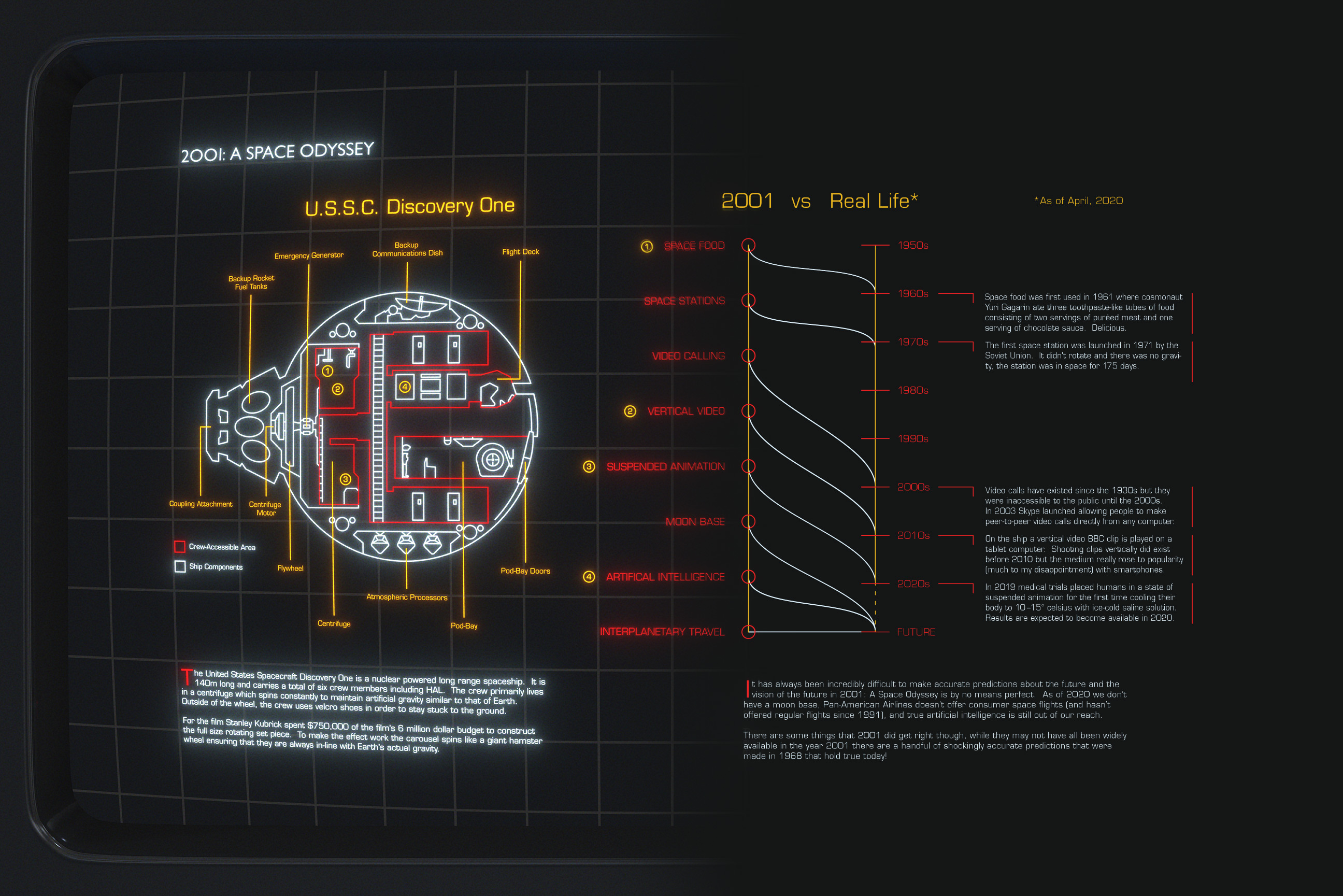 The right side (minus the background) consists of everything that was exported from Illustrator, the monitor bezel was made in Maya, everything else was created with Natron using the node graph above.

The great thing about node-based compositing programs is that the effects you apply to your image are (largely) separate from the input resolution. Vector graphics are great because they can be scaled to any resolution, similarly a procedural node-based workflow allows for the input resolution to be changed with only minor tweaks to the node-graph making it a decent companion to vector-based software. Pretty neat eh?

In the future creating an accurate CRT filtering process in Natron is something I’m absolutely interested in doing. Currently it’s blocked by a few software limitations however… If that sounds like something you were hoping to find in this post you may be interested in FFCRT.